A DYNAMIC CONGREGATION IN THE HAZELWOOD NEIGHBORHOOD OF PITTSBURGH

In 1912, Reverend Robert Burrell accepted the call to pastor in 1912. He purchased the property at 4542 Sylvan Avenue in 1913. Throughout his tenure, the front of the building, on the first floor, was used as a meeting place. Also, approximately twelve families and twenty two Sunday School members were affiliated with the church. During this time, George Lester was elected as the first church clerk. In 1914, three deacons were ordained. Saint John was granted a charter and incorporation on February 19, 1917. By 1918, the membership increased to thirty. The members sacrificed and $400 for the erection of a new church building. September 14, 1920, the ground was broken on the new building. On the third Sunday, in December 1920, the members proudly marched into the basement of the new church. Church services took place in the basement until the main auditorium was completed in 1922. Reverend Burrell resigned in 1925 after fourteen years of service.
Reverend S.G. Means was called, but resigned after a few years. Reverend William Revis succeeded Reverend Means during the depression years. From 1935 until 1940, Reverend I.J. Hall served.

During the latter part of 1940, Reverend J.M. Marbry served as pastor. During this time, the church building was destroyed by fire in December of 1942. Worship services were held at the Hazelwood Branch of the Carnegie Library for approximately four years. Following those years, the present site of 4537 Chatsworth Avenue was selected. In 1945, Deacon James was elected Chairman of the Deacon Board, and became Chairman Emeritus in 1981. Deacon Brantly served faithfully until his death on August 13, 1989. In 1946, the first unit of Saint John was completed. Reverend Marbry resigned in 1949, and was succeeded by Reverend M.L. Daw. Reverend Daw resigned in 1951, after successfully retiring the mortgage on the first unit.

Reverend Charles E. Wright accepted the call to pastor in 1952. He patiently toiled and labored with God’s help. During that time, Saint John’s second unit was completed and dedicated under his untiring leadership in May of 1958. The membership and fellowship increased tremendously during Reverend Wright’s tenure; and in 1966 the mortgage for the second unit was liquidated.
In 1971, for the first time in the history of the church, Saint John lost a pastor by death. The beloved Reverend Wright became ill and was called home from labor to reward on November 11, 1971.

Reverend Mitchell Douglas was called to pastor in September of 1972. He served from November of 1972 to July of 1974.

Saint John united and prayed that God would send us a leader. Reverend Alvin Coon accepted the call to pastor on November 16, 1976. He was installed on January 23, 1977. During Reverend Coon’s tenure, Trustee Charles Love and his wife, the late Mary Lee Sims Love, donated money to Saint John to build a ramp in the rear of the church to assist the elderly and physically challenged. The ramp was  completed in 1982. In the summer of 1989, a new addition to the church was built; two new restrooms, a secretary’s office, and the enlargement of the pastor’s office took place.

On December 4, 1992, Sister Carnie Mae Green became the first woman trustee. She was installed in January of 1993. One of Trustee Green’s accomplishments was the establishment of the Birthday Fel-lowship Ministry. She worked faithfully at St. John from 1986 until her death on July 20, 1994. Under Reverend Coon’s leadership, on May 19, 1998 Saint John purchased property. This tract of ground is also known as 209 Tullymet Street, located in the rear of the church. On November 15, 2011, the church purchased the property located the door, 4545 Chatsworth Street. Receiving her license to preach on October 10, 1999, Minister Wilma White Coon became the first woman in church history to be called to the Gospel Ministry. August 6, 2009, she went home to glory. On October 31, 2015 Reverend Alvin Coon retired after serving faithfully for 38 years and became Pastor Emeritus until his passing on July 10, 2018.

Reverend Colbert became Pastor Elect of St. John The Evangelist Baptist Church on April 12, 2019. He was installed on October 20, 2019.

Reverend Colbert became Pastor Elect of St. John The Evangelist Baptist Church on April 12, 2019. He was installed on October 20, 2019. He was an Associate at Morning Star Baptist Church in West Mifflin, PA under the Pastorate of Rev. Cathryn Brundage. Read more about Pastor Colbert. 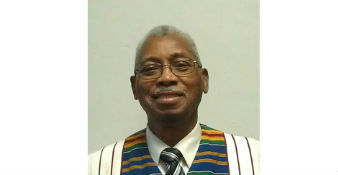 Rev. Alvin Coon accepted the call to pastor St. John on November 16, 1976. He was installed on January 23, 1977. Under his dynamic leadership and vision, St. John grew and acquired many items to beautify and improve the church. Read Pastor Coon's full biography.